Evolution of Marketing Channels Over the Last 20 Years

Marketing channels have evolved considerably in the past 20 years, particularly with the growth of content marketing online. Inbound marketing is used today more than ever before, and its effectiveness is also increasing. Keeping an eye on the past allows us to recall what works and what doesn't—we have certainly come a long way in the past 20 years.
Until recently, outbound marketing has been virtually the only marketing method in use. Outbound marketing is interruptive, demands attention, and can be considered downright rude in some situations. Traditional outbound methods include print ads or TV commercials and the like.

In the past, direct marketing was a really effective way of marketing. This included direct mail, targeted print newsletters, and product flyers or catalogs. These direct marketing channels were supplemented by outbound telemarketing.

As time goes on, marketing experts have become better at targeting specific demographics of people who are the most likely to purchase their products. This focus allows direct marketing to be more efficient and effective.

The 1990s were a huge decade for advertising technology. The Internet created new marketing channels that were more cost effective and simply worked better. Television use grew exponentially at that time, too. In the 1990s, television replaced print advertising as the most utilized form of advertising. Reviews grew from about $2.4 billion during this time to roughly $8.3 billion.

Search engines made their appearance in the mid-90s. Internet users grew by over 50 million people in the two years between 1995 and 1997. The term "search engine optimization" was also first used during this time. In 1998, Google created PageRank, which determines how pages should rank in search results for a specific term. Blogging was also developed around this time. 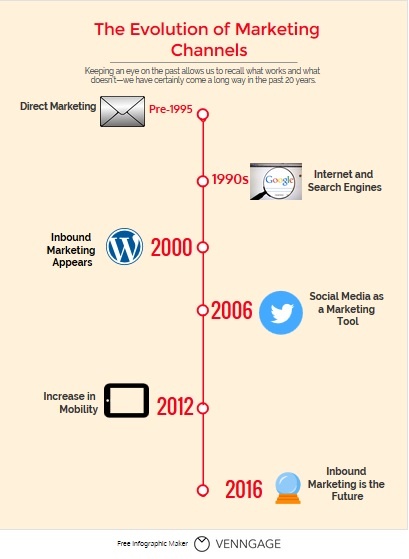 The dot.com bubble burst in 2000. Soon after, inbound marketing became the marketing tool of choice for those who were advertising online. Inbound marketing lets the user come to you—which provides better quality customers who are more likely to make purchases. The focus is on educating the consumer since they have more and easier access to information. This creates value for the customer instead of forcing unwanted ads on them.

Social Media as a Marketing Channel

Social media sprang to life in the early 2000s. Facebook, probably the most well-known and widely-used social media platform today was first launched in 2004. Twitter was created in 2006. It wasn't until 2012 that social media and blogging really became recognized as a viable marketing option. In fact, as of 2012, 44 percent of businesses that used Facebook acquired customers through that particular marketing channel.

Mobile phone usage jumped to 242.6 million in 2012, and 106.7 million of those users had smartphones. Tablet users also increased to 54.8 million during that year.

Taline is the founder of Laveh Inbound Marketing. Using modern marketing concepts without the hefty price tag, Taline has a history of leading small businesses to explosive growth.

Laveh is a Boston-based inbound marketing agency with a passion for helping small businesses thrive by taking digital marketing efforts to the next level.